From her first step into Watershed’s rustic studio, Arlynn Nobel—a 2017 summer artist-in-residence and Watershed board member—hoped to discover what lay in this space that could ignite new ideas in her work. During the first day of her Watershed residency, she reflected that she “could feel the history” and could feel that this environment was “a hot bed for creativity.” 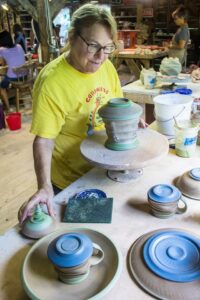 Arlynn Nobel during her 2017 residency.

Arlynn Nobel was born and raised in Detroit, but has lived and worked in Neebing, Ontario, a small town on the shore of Lake Superior in Canada, for many years. She earned her BFA from Nova Scotia College of Art and Design in 2007 and her MFA from University of Massachusetts Dartmouth in 2011. She describes herself as a “committed vessel maker, who enjoys challenging the limitations of the clay medium, opening up new avenues of expression by devising my own techniques for altering and assembling thrown forms.” Her experimental approach to ceramics drew her to Directly Playful: Watershed’s 2017 Session III residency organized by Didem Mert. This group of mostly functional makers, which also included Lisa Buck, Ian Childers, Mike Cinelli, James Davis, Amanda Dobbratz, Rachel Donner, Bebe Federmann, Yoonjee Kwak, Hannah Medovnikov, Annie Morford, Ronan Peterson, Carla Prinster, and Koen Vrij, came together to explore surface, form, and collaboration during their two-week residency. Because of Arlynn’s extensive background in ceramics, including many workshops and years of school, she was drawn to Watershed’s unique non-hierarchical model. She reflects upon certain moments in the Watershed studio during her 2017 summer residency:

“As I sat in front of my clay wondering what I would produce, it hit me—there were no instructors and no demos. I was in new territory. I realized that I had to dig deep within myself. All of a sudden I felt an intense sense of freedom and joy. I could make whatever I wanted to. I could explore unknown territories, or build on my current work, and there would be no critiques or professors with boundless instruction and input. I know that I would not be where I am today if it weren’t for all these wonderful professors and workshop leaders, but in that moment I felt free. So there I was, and I knew it could be the start of something magnificent.

I ordered my tried and true clay that I have been using for years. While I was waiting, I worked with the low-fire Watershed clay, which is full of grog and has opposite properties from what I’m used to. Using this clay I noticed something wonderful, and found that the Watershed clay’s qualities added a whole new element to my forms. I sent back my usual clay and I realized that changing clay bodies could jump start new and wonderful explorations in my work. 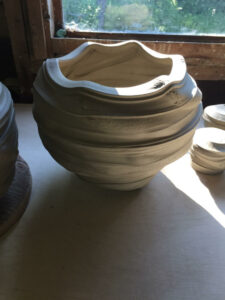 Arlynn experiments with her functional pieces using the Watershed clay. 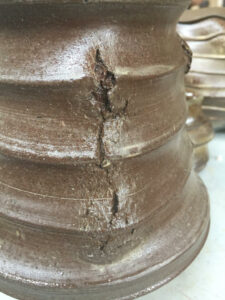 The rough quality of the clay adds new elements to Arlynn’s pieces.

I could feel the boundless energy in the room from fifteen peers who were in the same boat. Everyone was warming up, getting to know each other. Session leader Didem Mert was great. She walked around to see how everyone was doing and suggested that people collaborate. What?? Have someone else decorate my precious work?! I had never done that before. Much to my surprise I loved the collaborations. They gave me ideas of how to shake things up and make my work better. Koen Vrij, a fellow resident, walked over one day and suggested I use the feet from my bowls for my mugs. They looked fantastic (thank you, Koen!). 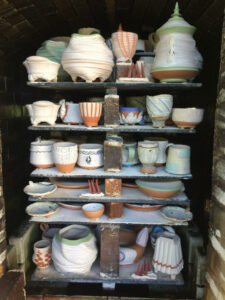 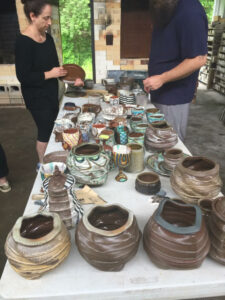 Artists unload the kiln of their finished work.

Ultimately, the answer to my question of what makes Watershed life-changing, is that within this space I found what comes next. How wonderful there is a place like Watershed to nurture our passions.” 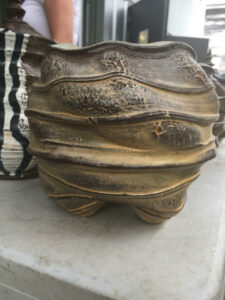 One of Arlynn’s finished pieces.