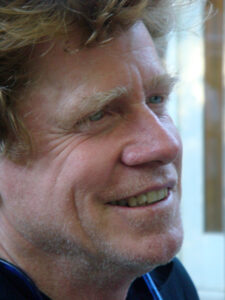 On October 14, The American Craft Council will induct Watershed Co-Founder Chris Gustin into the ACC College of Fellows for his outstanding achievements in the craft field. We are thrilled to celebrate with Chris as he receives this honor! His extensive body of ceramic work, as well as his commitment to forming creative spaces (like Watershed) where artists can engage, connect and informally learn from one another, highlight his unique vision and lasting impact on the clay community.

Chris grew up with clay in his blood, as his family co-owned several whiteware ceramic manufacturing companies in Los Angeles, CA. His love of clay developed early but it took his brother’s urging for Chris to pursue the artist’s path. He briefly worked for the family company as a factory foreman, but changed direction to attend college at Kansas City Art Institute and graduate school at Alfred University in the early 1970’s. 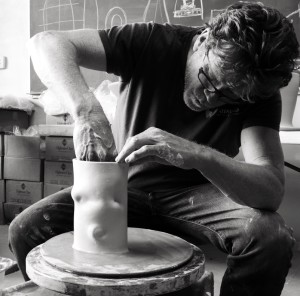 After completing his formal studies, Chris taught ceramics at a number of northeastern colleges and received several fellowships that helped establish his career in clay. He exhibited work extensively, both nationally and internationally, and eventually settled in South Dartmouth, Mass, where he still lives today. From 1989-1999 Chris served as Associate Professor of Ceramics at the University of Massachusetts, Dartmouth. He retired from teaching in 1999 to pursue his own studio practice and run his custom tile production company full time.

Chris’ profile in this month’s issue of American Craft magazine focuses on the pivotal impact that several personal and professional relationships have had on his life and career. He speaks about the profundity of his brother’s encouragement to follow his interest and passion for clay and the pride he has for the role Watershed has played in so many artists lives.

In the following video, hear Chris share the story of Watershed’s beginnings and enjoy scenes from our early days.  While our center continues to grow and develop, the core of what we offer—the opportunity for artists to live and work alongside one another and form lasting creative communities—remains true to Watershed’s origins.

Chris, we are grateful for your vision, passion, and dedication to not only your work and Watershed, but to the ceramics community as a whole. Congratulations on this well deserved award!